After my successful walk along Lake Sammamish (last week's post), I decided to attempt a more adventurous endeavor. A hike! What differentiates a hike from a walk? The Auburn Senior Center brochure says its walks are up to three miles long; hikes range from four to eight miles. Here's a description of the Tolmie State Park and Nisqually Delta outing.
(Click on photos to enlarge.) 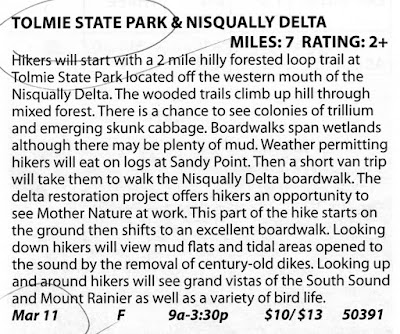 A van transported us to Tolmie State Park, not far from Olympia, Washington. We were lucky to have sunshine all along the trail. Because sections of the path were rough and rather steep, many hikers used poles. 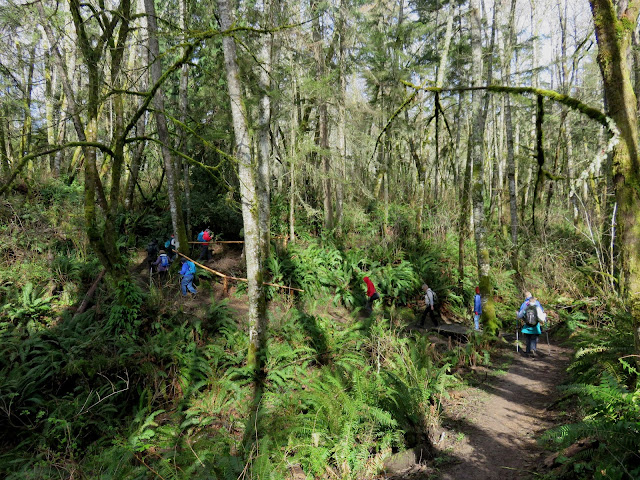 We've had a lot of rainfall recently, so although many parts of the trail were gravel and  boardwalks spanned some springs and wet areas, mud was unavoidable. Fortunately, my new waterproof boots lived up to their hype. 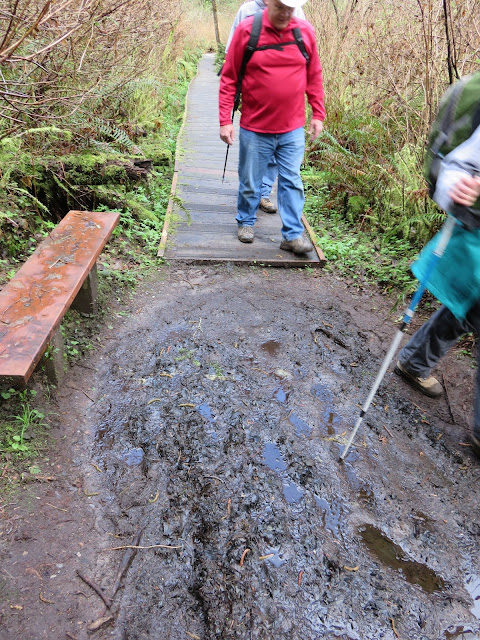 We walked among tall trees, many of them covered in lichen and bright green moss. The route was hilly with lots of ups and downs. 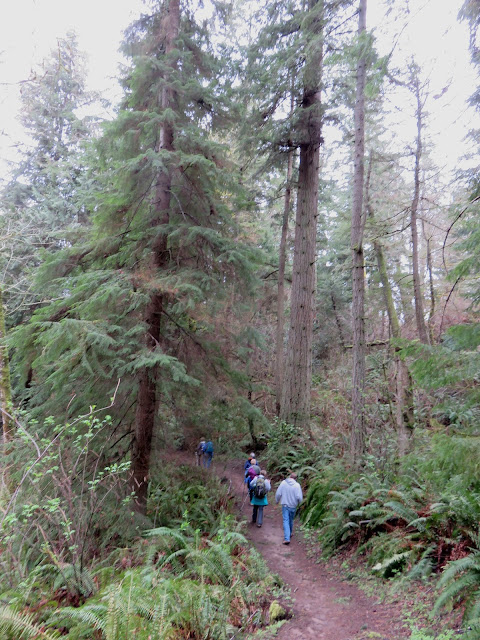 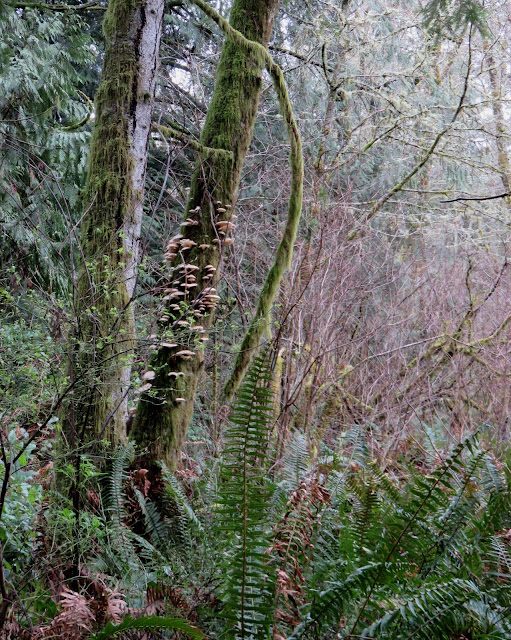 Once we'd completed the Tolmie trail, we stomped the mud from our boots, climbed back aboard the van, and headed for the Billy Frank Jr. Nisqually National Wildlife Refuge, not far away. As soon as we arrived, a rainstorm blew in, but intrepid adventurers all, we bundled up and headed out.

This hike was completely different from the first one. Where before we walked through the forest, now we traversed open marsh and tidal areas along a boardwalk. No mud! 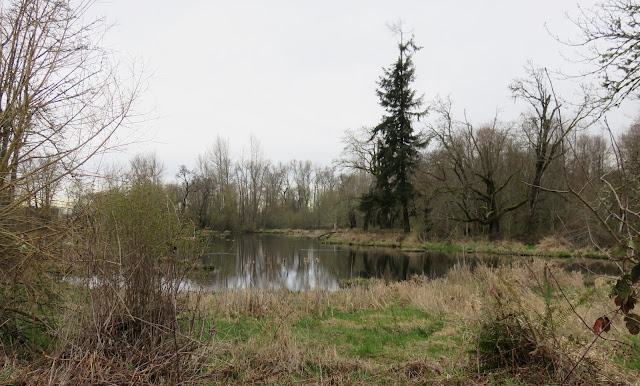 We walked past a marsh with pink scum floating on the water. No one knew for sure, but we guessed it might have been a red algae bloom. 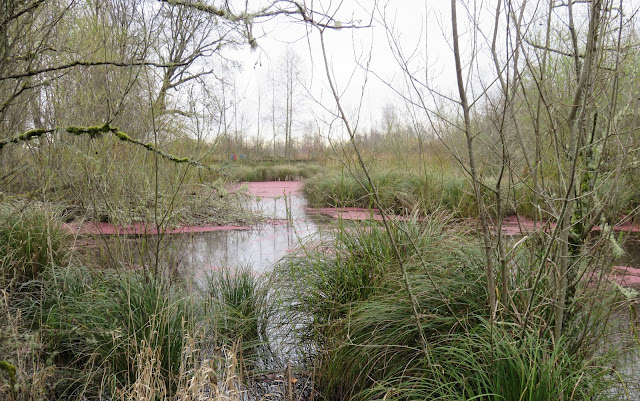 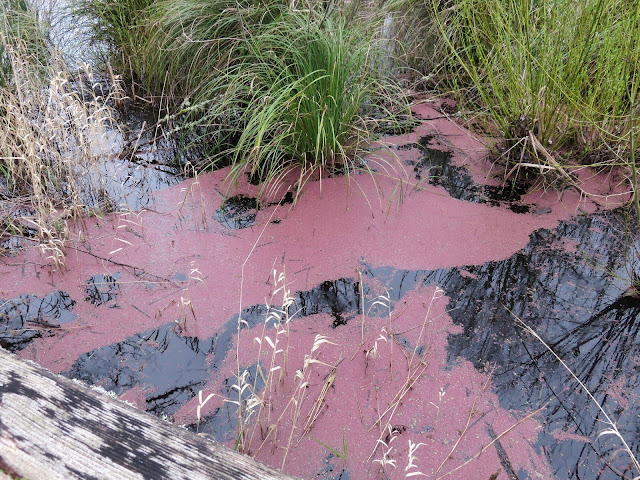 Our route led out of the marshes to the mudflats. When the tide is in, this area is completely covered with water. Most of us made it all the way to the end of the boardwalk in the pouring rain. We had dressed for the wet weather. Our efforts were rewarded when we saw flocks of geese, ducks, and several blue herons. 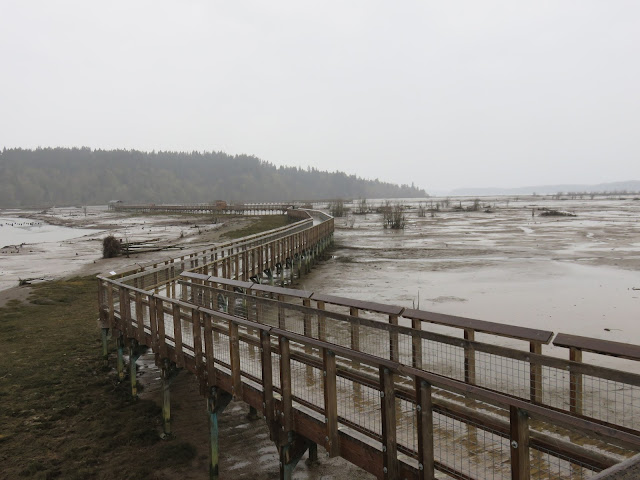 I hope to visit both parks again on a sunny day. There's supposed to be a spectacular view of Mount Rainier, the Olympic Mountains, and some of the islands in Puget Sound from the end of the boardwalk, but on this day everything hid behind the clouds.

To participate in Saturday Snapshots: post a photo that you (or a friend or family member)
have taken then leave a direct link to your post in the Mister Linky on the host blogsite.
Photos can be old or new, and be of any subject as long as they are clean and appropriate
for all eyes to see. How much detail you give in the caption is entirely up to you.
at 9:22 PM