The Locket - Book Beginnings on Friday and The Friday 56 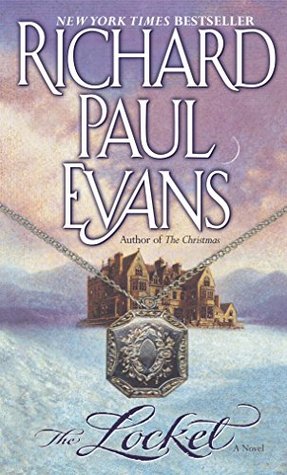 The Locket is one of those books that made me stay up later than I wanted one night because I absolutely HAD to find out how the story ended. My heart ached for Michael Keddington, and I wasn't sure if the innocent man would go to jail or be exonerated. Since this is not a romance, a happy ending was not guaranteed. Now I've discovered that this is the first book in a trilogy. Guess there will be more late nights in my future.
FYI: This author also wrote The Christmas Box.

Book Beginning (Prologue):
There are those who maintain that it is a shameful thing for a man to speak of sentiment, and the recounting of a love story must certainly qualify as such. But if there is virtue in stoicism, I do not see it, and if I haven't the strength to protest, neither have I the will to conform, so I simply share my story as it is. Perhaps time has thinned my walls of propriety as it has my hair.

The Friday 56 (from Page 156 in my hardback copy):
As I watched her go it was like one of those dreams where you open your mouth to scream but you can't. Then a voice inside of me said to let her go - that if I really loved her, I would let her find something better, something whole and new that she could build a whole life around.

Synopsis:
After the death of his mother, Michael Keddington finds employment at the Arcadia nursing home where he befriends Esther, a reclusive but beautiful elderly woman who lives in mourning for her youth and lost love.     Michael faces his own challenges when he loses his greatest love, Faye. When Michael is falsely accused of abusing one of the Arcadia's residents, he learns important lessons about faith and forgiveness from Esther -- and her gift to him of a locket, once symbolic of one person's missed opportunities, becomes another's second chance. 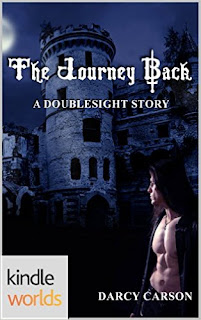 I've read quite a few fantasy and science fiction novels and short stories over the years, but The Journey Back is my first venture into Kindle Worlds' fan fiction. It won't be my last. I enjoyed Darcy Carson's story so much that I'm looking forward to reading more of her Doublesight tales in the future.

Here's the First Paragraph:
The road back is never the same. A fact Korban was fast learning. The last time he had traveled the heavily rutted road he'd been delirious, trussed up like a hunter's kill, and tossed into a wagon with a blanket smelling of horse thrown over his body so none would catch sight of his departure.

Teaser (from 25% on my Kindle):
Oh, sure, throwbacks and gargoyles were dangerous, especially those who ate human flesh. But, not all gargoyles were bad.

Synopsis:
Human only Korban returns in The Journey Back where he learns everyone has a secret, After surviving the dreaded fire death disease, he arrives at Castle Weilk where he was raised by his uncle, the king, after his parents were murdered. He suspects the king knows the doublesights had something to do with his recovery. Knowing he is no longer welcomed, he leaves for his ancestral home to find answers that have plagued him over the years. Along the way attempts are made to kill him, but a childhood doublesight friend saves him . . . not once, but twice. Once home, Korban learns the truth about a decade old mystery about his parents that will change the course of his life.

Fever Season - The Friday 56 and Book Beginnings on Friday It's fun to step outside my usual genre and read something completely different, and that certainly applies to Fever Season. The protagonist in this story is "a free man of color" (Benjamin January), living in New Orleans in 1833, not long before the War Between the States. He is a physician and a musician, but his life is filled with uncertainty because of his race.
The story fascinated me, and I learned a lot about the realities of that time and place while being caught up in the mystery. Fever Season is the second book in the thirteen-book Benjamin January series.

Book Beginning:
In fever season, traffic in the streets was thin. Those who could afford to do so had left New Orleans with the ending of Lent; those who could not had all through the long summer hurried about their business as if Bronze John, as they called the sickness, were a creditor one could avoid if one kept off the streets.
Midday, the molten September heat raised steam from the water in the French town's cypress-lined gutters and the rain puddles in the soupy streets. Mephitic light filtered through clouds of steamboat soot from the levees and gave the town the look of a grimy but inexplicably pastel-walled hell. Only those whose errands were pressing walked the streets then.
[Can't you just feel the oppressive humidity and the fear of yellow fever?]

The Friday 56 (from 56% on my Kindle):
He felt a little safer, this close to New Orleans, but never ceased to listen before him and behind. Each time he heard the crunch of hooves approaching from either direction he quickly left the oyster-shell pathway and waited in the woods until whoever was passing him had vanished from sight.

Synopsis from Amazon:
Benjamin January made his debut in bestselling author Barbara Hambly's A Free Man of Color, a haunting mélange of history and mystery. Now he returns in another novel of greed, madness, and murder amid the dark shadows and dazzling society of old New Orleans, named a Notable Book of the Year by the New York Times.     The summer of 1833 has been one of brazen heat and brutal pestilence, as the city is stalked by Bronze John—the popular name for the deadly yellow fever epidemic that tests the healing skills of doctor and voodoo alike. Even as Benjamin January tends the dying at Charity Hospital during the steaming nights, he continues his work as a music teacher during the day.     When he is asked to pass a message from a runaway slave to the servant of one of his students, January finds himself swept into a tempest of lies, greed, and murder that rivals the storms battering New Orleans. And to find the truth he must risk his freedom...and his very life.
FYI: This versatile author has written fantasy, romance, science fiction, mystery, and vampire stories. 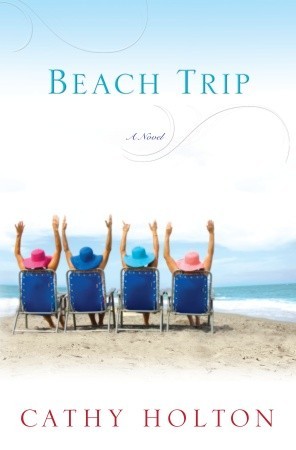 With all the cold, rainy weather we've been having here in the Pacific Northwest, I've turned to beach stories as an antidote to the dark days. Beach Trip by Cathy Holton did that job well. The story of four friends reuniting at a North Carolina beach house captivated me from the opening all the way to the satisfying ending. The story switches between the women's college days (1982) and their reunion (2005), and covers the years in between. The author's sense of humor kept me smiling.
I'm picky about formatting and the craft of writing, and while I didn't see any grievous errors, I felt like the editors at big-time Ballantine could have done a better job for this author. But having said that, the things I noticed didn't prevent me from enjoying this engaging story.

Lola was engaged to Briggs Furman, so her roommates were stunned the evening she came home and told them she was in love with a boy named Lonnie. They sat around in various poses of disbelief and concern, watching Lola and Lonnie, who stood, arms entwined, in the middle of the living room. Lola had leaves in her hair. This was six weeks before they were all set to graduate from college and go their separate ways into the wide world, and no one had suspected Lola of a secret love affair. Least of all Briggs.

Teaser (from 36% on my Kindle):
Once he realized Annie was on the Pill and there'd be no repercussions, no squalling babies or homicidal parents to contend with, Mitchell took to sex like flies to roadkill. His words. There was nothing of the romantic poet about Mitchell Stiles.

Synopsis:
Mel, Sara, Annie, and Lola have traveled diverse paths since their years together at a small Southern liberal arts college during the early 1980s. Mel, a mystery writer living in New York, is grappling with the aftermath of two failed marriages and a stalled writing career. Sara, an Atlanta attorney, struggles with her own slowly unraveling marriage. Annie, a successful Nashville businesswoman married to her childhood sweetheart, can’t seem to leave behind the regrets of her youth. And sweet-tempered Lola whiles away her hours—and her husband’s money—on little pills that keep her happy.
Now the friends, all in their forties, converge on Lola’s lavish North Carolina beach house in an attempt to relive the carefree days of their college years. But as the week wears on and each woman’s hidden story is gradually revealed, these four friends learn that they must inevitably confront their shared past, and a secret that threatens to change their bond, and their lives, forever.