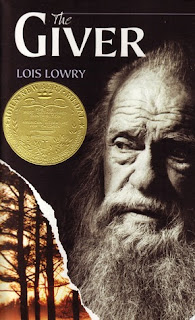 I don't often read science fiction or young adult novels, but after seeing the opening paragraph and synopsis of The Giver on someone's blog, I decided to give this book a try. I was blown away by this story! No wonder the book has won all kinds of awards. I highly recommend The Giver for readers of all ages. It is Book 1 in the Giver Quartet, and I'm looking forward to reading the rest ASAP.
FYI: I understand this book was made into a movie but when I watched the trailer, it seemed to encompass more than the story told in this book. Perhaps it is based on all the books in the series.

First Paragraph:
It was almost December, and Jonas was beginning to be frightened. No. Wrong word, Jonas thought. Frightened meant that deep sickening feeling of something terrible about to happen. Frightened was the way he had felt a year ago when an unidentified aircraft had overflown the community twice. He had seen it both times. Squinting toward the sky, he had seen the sleek jet, almost a blur at its high speed, go past, and a second later heard the blast of sound that followed. Then one more time, a moment later, from the opposite direction, the same plane.

Teaser (from 51% on my Kindle):
"Our people made that choice, the choice to go to Sameness. Before my time, before the previous time, back and back and back. We relinquished color when we relinquished sunshine and did away with differences."

Synopsis (from Goodreads):
The haunting story centers on Jonas who lives in a seemingly ideal, if colorless, world of conformity and contentment. Not until he is given his life assignment as the Receiver of Memory does he begin to understand the dark, complex secrets behind his fragile community. Lois Lowry has written three companion novels to The Giver, including Gathering Blue, Messenger, and Son.