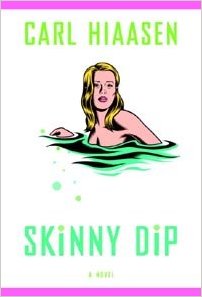 I lived in South Florida for many years, and during that time, I discovered Carl Hiaasen through his columns in The Miami Herald. It wasn't long before I became a fan and started collecting his novels. Hiaasen's stories involve bizarre characters, crazy plots, sex, murder, and corruption and have an environmental twist. (Warning: R-rated.)
Kirkus Reviews says Skinny Dip is "bitingly satirical, sublimely zany, and deeply satisfying." I agree!

First Paragraph(s):
At the stroke of eleven on a cool April night, a woman named Joey Perronne went overboard from a luxury deck of the cruise liner M.V. Sun Duchess. Plunging toward the dark Atlantic, Joey was too dumbfounded to panic.
I married an asshole, she thought, knifing headfirst into the waves.
The impact tore off her silk skirt, blouse, panties, wristwatch and sandals, but Joey remained conscious and alert. Of course she did. She had been co-captain of her college swim team, a biographical nugget her husband obviously had forgotten.
Bobbing in its fizzy wake, Joey watched the gaily lit Sun Duchess continue steaming away at twenty nautical miles per hour. Evidently only one of the other 2,049 passengers was aware of what had happened, and he wasn't telling anybody.

Teaser from Page 204 (hardback copy):
"All you wanted," the man said, "was a hot girl on your arm, Chazzie. A girl your buddies would notice and talk about--the female equivalent of a new Rolex. You weren't getting married, you were accessorizing."

Synopsis (from Amazon):
Chaz Perrone might be the only marine scientist in the world who doesn’t know which way the Gulf Stream runs. He might also be the only one who went into biology just to make a killing, and now he’s found a way–doctoring water samples so that a ruthless agribusiness tycoon can continue illegally dumping fertilizer into the endangered Everglades. When Chaz suspects that his wife, Joey, has figured out his scam, he pushes her overboard from a cruise liner into the night-dark Atlantic. Unfortunately for Chaz, his wife doesn’t die in the fall.
Clinging blindly to a bale of Jamaican pot, Joey Perrone is plucked from the ocean by former cop and current loner Mick Stranahan. Instead of rushing to the police and reporting her husband’s crime, Joey decides to stay dead and (with Mick’s help) screw with Chaz until he screws himself.
As Joey haunts and taunts her homicidal husband, as Chaz’s cold-blooded cohorts in pollution grow uneasy about his ineptitude and increasingly erratic behavior, as Mick Stranahan discovers that six failed marriages and years of island solitude haven’t killed the reckless romantic in him, we’re taken on a hilarious, full-throttle, pure Hiaasen ride through the warped politics and mayhem of the human environment, and the human heart.