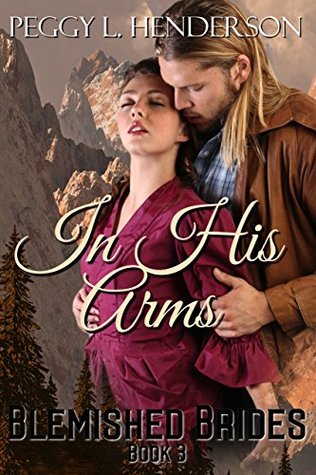 I'm fascinated by stories that involve the Orphan Trains, and that's what attracted me to In His Arms. In case you didn't know, the Children's Aid Society and other organizations transported orphaned children from New York City to rural areas for adoption, beginning around 1854 and continuing until 1929. Though some children were taken into loving homes, many were treated as hired hands or slaves. In His Arms is a novel about a young disabled women from an orphan train who was mistreated by the people who adopted her, eventually escaped, and went on a search for her sister.
FYI: Although this is Book 3 in the Blemished Bride series, it stands alone.

First Paragraph / First Chapter:
Elk Lodge, Montana Territory 1888
The mule brayed and balked, its incessant calls mixing with the sounds of harnesses jingling and horses trotting down the busy main street of Elk Lodge. Levi Colter tugged on the lead rope and cursed the ornery critter he'd dragged behind him for the last ten miles since coming out of the mountains.

Teaser (from 47% on my Kindle):
Cold fury had raced through him, fueled by what he'd learned about Grace, and what had happened to her. The system that was supposed to provide for children without families, and find a better life for them, had failed her miserably. How many more orphans were out there who might be worse off than before?

Synopsis from Goodreads:
A woman unable to trust. A man consumed by guilt. Can two lonely souls find a common ground and pave a path to love?      Grace Jennings knows how to survive, but she’s learned long ago not to trust anyone, least of all a man. Sent west on an orphan train with her sister, Grace finds herself adopted into an unimaginable situation. She will stop at nothing to find and reunite with her sibling, and keep her safe from the man who is out to exploit homeless young girls.      Levi Colter is a loner by choice. Haunted by the guilt of his sister’s death, he escapes into the mountains with his grief. Living an isolated life protects him from the heartache of losing those closest to him. When a stubborn young woman and a couple of runaways seek shelter at his cabin, Levi's solitary existence is turned upside down.      Thrown together unexpectedly, Grace and Levi are forced to put old hurts aside and confront their deepest demons. Can two people with troubled pasts let go of their guilt and mistrust, and learn what it means to open their hearts? *Content Warning: This book contains mild language, mild violence, and physical intimacy, and is intended for mature readers. Heat Level: 2-3 (on a scale of 1-5), PG/PG13

First Chapter/First Paragraph/Tuesday Intros is hosted by Bibliophile By The Sea. To participate, share the first paragraph (or a few) from a book you're reading or thinking about reading soon.
Link at BibliophileByTheSea
at 9:39 PM