Widow's Tears - Book Beginnings on Friday and The Friday 56 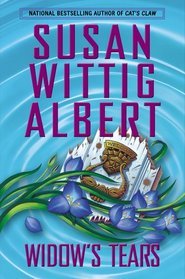 Do you like haunted houses? How about historical fiction? Or mysteries? Then Widow's Tears is a book you'll enjoy. The historical part of the book takes place during the Galveston, Texas, hurricane of 1900. From her vivid description, it's obvious that Susan Wittig Albert did her research about that devastating storm. The author skillfully switches between the past and present and weaves the two stories together to a satisfying conclusion.
This book is #21 in the China Bayles series and it stands alone. I enjoyed getting to know the friends in this story and wish I'd known about this series sooner! I'm sure I'll be reading the earlier books soon.

The coast of Texas is according to the general laws of the motion of the atmosphere exempt from West India hurricanes and the two which have reached it followed an abnormal path which can only be attributed to causes known in meteorology as accidental.... It would be impossible for any cyclone to create a storm wave which could materially injure the city [of Galveston].

The Friday 56 (from 56% on my Kindle):
At one time, the little cemetery must have been well kept and even beautiful, for there were oleanders and gnarled hollies all along the fence, as well as a couple of stone benches and flower urns placed along the walk. But from the looks of the rampant undergrowth, it hadn't been touched in years.

Synopsis:
Herbalist and ex-lawyer China Bayles is “in a class with lady sleuths V. I. Warshawski and Stephanie Plum” (Publishers Weekly).  In Widow’s Tears, a haunted house may hold the key to solving the murder of one of China’s friends…
After losing her family and home in the Galveston Hurricane of 1900, Rachel Blackwood rebuilt her house a hundred miles inland and later died there, still wrapped in her grief.
In present-day Texas, Claire, the grandniece of Rachel’s caretaker, has inherited the house and wants to turn it into a bed-and-breakfast. But she is concerned that it’s haunted, so she calls in her friend Ruby—who has the gift of extrasensory perception—to check it out.
While Ruby is ghost hunting, China Bayles walks into a storm of trouble in nearby Pecan Springs. A half hour before she is to make her nightly deposit, the Pecan Springs bank is robbed and a teller is shot and killed.
Before she can discover the identity of the killers, China follows Ruby to the Blackwood house to discuss urgent business. As she is drawn into the mystery of the haunted house, China opens the door on some very real danger…