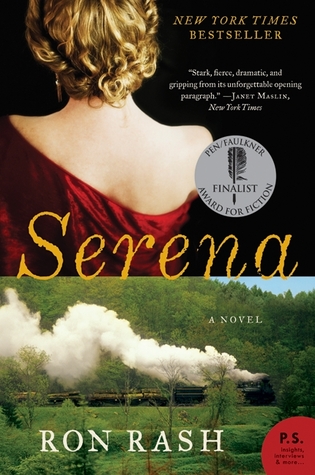 Ron Rash tells the story of George and Serena Pemberton, lumber moguls in the mountains of North Carolina during the Great Depression. The dangerous conditions under which trees were harvested, the devastation of the environment, and the absolute power that the lumber barons held over their workers are all described in vivid and realistic detail. The Pembertons and their obsessive relationship made for a fascinating story.
The Pembertons' ability to literally get away with murder and their corruption of government officials would have been hard to believe if I hadn't seen a recent piece on the History Channel about John D. Rockefeller's massacre of striking coal miners in Ludlow, Colorado -- something that actually happened.*
This story definitely held my interest, and I enjoyed the glimpse into the Depression era. My only real complaint is that Serena's viciousness was never explained to my satisfaction. I would like to have known what caused her to be so ambitious and so ruthless.

First Paragraph:
When Pemberton returned to the North Carolina mountains after three months in Boston settling his father's estate, among those waiting on the train platform was a young woman pregnant with Pemberton's child. She was accompanied by her father, who carried beneath his shabby frock coat a bowie knife sharpened with great attentiveness earlier that morning so it would plunge as deep as possible into Pemberton's heart.

Teaser (from Page 103 - trade paperback edition):
Serena loosed the leather laces and removed the eagle's hood, then freed the leash from the bracelets. She raised her right arm. As if performing some violent salute, Serena thrust her forearm and the eagle upward.

The year is 1929, and newlyweds George and Serena Pemberton travel from Boston to the North Carolina mountains where they plan to create a timber empire. Although George has already lived in the camp long enough to father an illegitimate child, Serena is new to the mountains—but she soon shows herself to be the equal of any man, overseeing crews, hunting rattlesnakes, even saving her husband's life in the wilderness. Together this lord and lady of the woodlands ruthlessly kill or vanquish all who fall out of favor. Yet when Serena learns that she will never bear a child, she sets out to murder the son George fathered without her. Mother and child begin a struggle for their lives, and when Serena suspects George is protecting his illegitimate family, the Pembertons' intense, passionate marriage starts to unravel as the story moves toward its shocking reckoning.
Rash's masterful balance of violence and beauty yields a riveting novel that, at its core, tells of love both honored and betrayed.
*More info about the Ludlow, Colorado, massacre HERE.