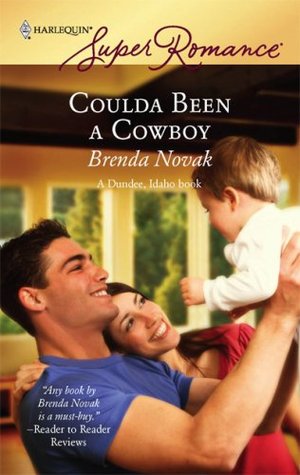 When I started reading COULDA BEEN A COWBOY, I sort of expected the football super-star (Tyson Garnier) and the nanny (Dakota Brown) to take one look at each other and fall madly in love. But that’s not what happened at all. Dakota leads a grim life—living in poverty and committed to caring for her ailing father. Tyson has just obtained custody of his son, the result of a brief fling. He’s a good man who just wants to do what’s right. Since he's clueless about child care, he hires Dakota to be his son's nanny.
Author Brenda Novak has done a great job of creating interesting and believable characters, and she tells a good story. Of course, since this is a romance, you know there's a happily-ever-after or happy-for now ending. But I enjoyed the characters' journey to that happy finale.

BOOK BEGINNING - (FYI: Every chapter starts with a quote from Tyson's grandfather):
Grandpa Garnier: If you find yourself in a hole, the first thing to do is stop digging.
She seemed ideal: slightly overweight, older than the typical groupie and definitely on the frumpy side. All of which would keep things as simple as Tyson Garnier needed them to be.

FRIDAY 56 (from 56% on my Kindle):
"Where were you?" he asked, shoving his seat forward so he could stow his bag behind it.
She didn't want to tell him she'd spent two hours at Planned Parenthood and started on the pill, as he'd suggested. She was still in denial about maybe needing the protection. "Shopping for clothes for the party."

Grandpa Garnier used to say, Love is like a bucking bronco. It takes guts and determination to hang on, but it's worth the ride.
If only Grandpa was around now to help Tyson Garnier out of this mess. The famous pro football player is suddenly saddled with a very public scandal—and an illegitimate child. Tyson needs a good nanny now if he's going to salvage his career. And plain, no-nonsense Dakota Brown is the ideal candidate.
Dakota doesn't care for football—or for a man who doesn't seem to want his own son. But she needs this job, and that precious little baby needs her.
Dakota isn't Tyson's kind of woman. But the more he sees of her—and the more he sees of his son—the harder he wants to hang on.