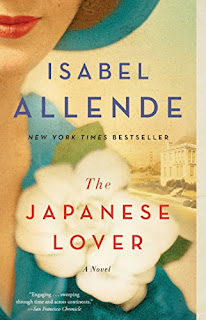 I've been trying to find words to describe how much I enjoyed The Japanese Lover by Isabel Allende, but nothing I write can compare to what others have already said.

"Themes of lasting passion, friendship, reflections in old age, and how people react to challenging circumstances all feature in Allende's newest saga, which moves from modern San Francisco back to the traumatic WWII years." - Booklist

"The Japanese Lover is a poetic and profound meditation on the power of love: a common theme, sure, but in Allende's capable hands this trope is made utterly new." - Bustle

"Animated...lush...a novel that's a pleasure to recommend." - The Washington Post

First Paragraph (Current day)
Lark House
When Irina Bazili began working at Lark House in 2010, she was twenty-three years old but already had few illusions about life. Since the age of fifteen she had drifted from one job, one town, to another. She could not have imagined she would find a perfect niche for herself in that senior residence, or that over the next three years she would come to be as happy as in her childhood, before fate took a hand. Founded in the mid-twentieth century to offer shelter with dignity to elderly persons of slender means, for some unknown reason from the beginning it had attracted left-wing intellectuals, oddballs, and second-rate artists. Lark House had undergone many changes over the years but still charged fees in line with each resident's income, the idea being to create a certain economic and racial diversity. In practice, all the residents were white and middle class, and the only diversity was between freethinkers, spiritual searchers, social and ecological activists, nihilists, and some of the few hippies still alive in the San Francisco Bay area.

Teaser #1 (During World War II - from Page 82):
The Belascos' garden remained deaf to the defamatory propaganda campaign against the Japanese, who were accused of unfair competition against American farmers and fishermen, threatening white women's virtue with their insatiable lust, and corrupting American society by their Oriental, anti-Christian ways. Alma only found out about these slurs two years after she had arrived in San Francisco, when from one day to the next the Fukuda family became the "yellow peril." By that time she and Ichimei were inseparable friends.

Teaser #2 (Current day - from Page 185):
At sixty she had thought of death in abstract terms as something that did not concern her; at seventy it was a distant relative who was easy to forget because it never arose in conversation, but would inevitably come to visit one day. After she turned eighty, however, she began to become acquainted with it, and to talk about it with Irina. She saw death here and there, in a fallen tree in the park, a person bald from cancer, her mother and father crossing the street: she recognized them because they looked just like they did in the Danzig photograph.

In 1939, as Poland falls under the shadow of the Nazis, young Alma Belasco’s parents send her away to live in safety with an aunt and uncle in their opulent mansion in San Francisco. There, as the rest of the world goes to war, she encounters Ichimei Fukuda, the quiet and gentle son of the family’s Japanese gardener. Unnoticed by those around them, a tender love affair begins to blossom. Following the Japanese attack on Pearl Harbor, the two are cruelly pulled apart as Ichimei and his family—like thousands of other Japanese Americans—are declared enemies and forcibly relocated to internment camps run by the United States government. Throughout their lifetimes, Alma and Ichimei reunite again and again, but theirs is a love that they are forever forced to hide from the world.
Decades later, Alma is nearing the end of her long and eventful life. Irina Bazili, a care worker struggling to come to terms with her own troubled past, meets the elderly woman and her grandson, Seth, at San Francisco’s charmingly eccentric Lark House nursing home. As Irina and Seth forge a friendship, they become intrigued by a series of mysterious gifts and letters sent to Alma, eventually learning about Ichimei and this extraordinary secret passion that has endured for nearly seventy years. Sweeping through time and spanning generations and continents, The Japanese Lover explores questions of identity, abandonment, redemption, and the unknowable impact of fate on our lives. Written with the same attention to historical detail and keen understanding of her characters that Isabel Allende has been known for since her landmark first novel The House of the Spirits, The Japanese Lover is a profoundly moving tribute to the constancy of the human heart in a world of unceasing change.