The Songbird's Call - #TheFriday56 and #BookBeginnings on Friday 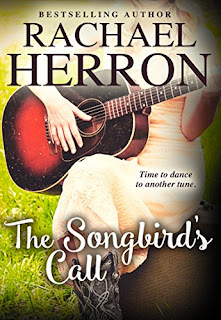 If you're in the mood for a contemporary romance with a small-town California setting, you'll definitely enjoy The Songbird's Call. In this story, Rachael Herron creates likable, believable characters with real life problems. Molly, the protagonist, has ongoing issues with her weight. She's "the fat one" of the three sisters, and she's recovering from a bad relationship, one in which she suffered from verbal abuse.
This is Book 2 in the trilogy, but it stands alone. However, I'm looking forward to reading Books 1 and 3 so I can learn more about Molly's two sisters, who are an important part of this book.
FYI: The book contains a couple of scenes of explicit sex, but they are between loving adults and not gratuitous. The whole book is nicely written.

Book Beginning:
At one time in her life, Molly had liked a good old-fashioned country dive bar as much as the next singer-songwriter. Every honky-tonk smelled a little different, but they shared the same notes of pine dust and good tequila, of cowboy aftershave made of bay run and cloves mixed with the scent of bitters and quinine. Each bar sounded the same, too - bottle caps snapping off, Hank Williams wailing on the jukebox, balls clacking on the pool table, men trying to impress women who were laughing and pretending to pay no attention.
Molly inhaled deeply and then wished she was back on the cruise ship.

Friday 56 (from 56% on my Kindle):
The band broke up shortly thereafter when their father died. They'd all lost their voices, and their way. Molly took away one thing: she wouldn't be forced into situations.

Once Adele, Molly and Lana were The Darling Songbirds, a world-famous country band. Now they're just three sisters who barely speak. But that's about to change.
Middle sister Molly arrives in town, and is immediately drawn to the neglected little café where she worked as a teenager. Could she dare to bring it back to life? As lead singer, Molly had always been the voice of the band. But caught between controlling big sister Adele and demanding baby sister Lana, she never felt heard. If she's going to reopen the café, she'll do it on her own terms, no more being bossed.

So the last person she should fall for is the handsome Sheriff Colin McMurty - the man whose job it is to tell people exactly what to do.