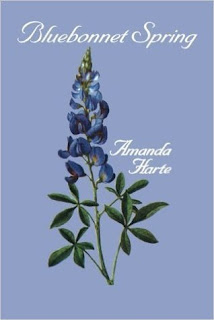 Set on the Big Island of Hawaii and in the Texas hill country, Bluebonnet Spring is the story of widowed Rebecca Barton (who is "on the wrong side of thirty") and hunky Doug West (ditched by phone by his fiancée on the eve of their Hawaiian wedding). Rebecca is in Hawaii doing research on how hotels operate before deciding whether or not to open an inn back in Canela, Texas. When they meet, Doug suggests they share his honeymoon package - plantonically, of course. It would be a shame for it to go to waste. When the week is over, they go their separate ways - Doug to Detroit; Rebecca to Canela. But is that the end for them?
I enjoyed visiting Hawaii through this book - and I love bluebonnets! It also was fun to see Rebecca change through the course of the story.

Bluebonnet Spring is a sweet romance with no sex and no profanity.

First Paragraph:
It was a mistake. A colossal mistake. Rebecca Barton settled back in the surprisingly comfortable rattan chair and tried to relax. She could tell herself that the problem was jet lag. After all, it had taken close to twelve hours of flying to get from Canela to Hilo. But Rebecca had never been one for self deception. She knew the problem wasn't jet lag, nor was it simple fatigue.

Teaser (from 12% on my Kindle):
The trail they were climbing grew steep and narrow. Though initially Doug had suggested Rebecca lead the way to set the pace, now he moved past her, clambering over a large boulder, then reached back to help her. She put her hand in his.

Synopsis (from Goodreads):
It can't be a coincidence that the band is playing "Stranger in Paradise," not when that's exactly how Rebecca Barton would describe herself.
No matter how beautiful the Hawaiian honeymoon resort is, it's no place for a widow with two children and a brown dachshund waiting for her back home in Texas. Why on earth did she think that this trip would be a good way to decide whether she's ready to open a hotel of her own? It's a mistake, a huge mistake---just like offering first aid to the handsome stranger at the next table was a mistake.
Flying all the way from Detroit to Hawaii for what was supposed to be his wedding, he discovered that his fiancé jilted him. And if that wasn't bad enough, he managed to catch his sleeve on fire and then snarl at the beautiful woman who tried to help him. Oddly enough, it's the snarling that bothers him the most, especially when he discovers just how charming Rebecca is. In an uncharacteristically impulsive act, Doug suggests they spend the next week touring the island together.
It's a magical week, one that both Rebecca and Doug know will never be repeated, for this is their version of a shipboard romance. They will never see each other again. But fate has other ideas, and a year later Doug arrives at Bluebonnet Spring, Rebecca's newly opened country inn, for a month's stay. It should be a dream come true. Instead, Doug is Rebecca's worst nightmare. There's no hope for a happy ending for them...or is there?