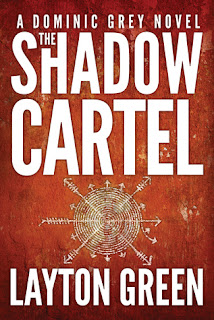 I enjoy reading books that are set in places I've visited or towns where I've lived. So when I saw that The Shadow Cartel was set in Miami, where I lived for many years, I knew I had to read it, even though the story is outside my usual genre.
I've just started reading the book, and I'm enthralled by the story! The author obviously knows the city inside and out. He even mentioned the neighborhood where my husband and I once lived. From the venerable Tobacco Road bar to the high rise office buildings along Brickell Avenue, I'm enjoying my virtual visit back to South Florida.
The Shadow Cartel is Book #4 in the Dominic Gray Series.

First Paragraph:
Peoples Temple Agricultural Project,
Northwest Guyana
November 18, 1978
The man known as John Wolverton cocked his head at the sound, a faint thwap that echoed through the vines and trees. He reasoned the shot had come from a poacher's rifle.
Surely it hadn't come from the Port Kaituma airstrip. From Congressman Ryan's delegation, sent to investigate the conditions of Reverand Jones's utopian cult that had set up shop in the middle of the Guyanese jungle. Reverend Jones was a sociopath, but he wasn't suicidal, and the doctors agreed the two were mutually exclusive.


Teaser (from 21% on my Kindle):
[Here's a character's description of Miami from her memories. Yes, it's only two sentences.]
She could still draw a map of the Fairchild Botanical Gardens, picture the evening light sinking into No Name Harbor, and tell friends visiting the city where to find the best ceviche, the most authentic sangria, the perfect little wine shop hidden in the maze of Cuban bakeries on Coral Way. She loved the smell of roasting coffee, the sexy fashion boutiques, the day trips to the Everglades and the weekend trips to the Keys, the serendipity of a peacock sighting on the way to the grocery store, the delight of biting into one of the mangoes weighing down the limbs of neighborhood trees in summer.

The sins of the past always return...
The General.  A name whispered in hushed tones among the criminal underworld, from Miami to Buenos Aires.  A name even the drug cartels fear.
Yet the General is a man without a face.  There are no fingerprints on file, no known base of operations, not even a biographical sketch.  He operates in the shadows, but somehow controls a vast criminal empire.
And he has never made a direct incursion onto U.S. soil -- until now.
In Miami, disgraced DEA agent Fred Hernandez is called to investigate a bizarre crime scene, where the bodies of four drug dealers are sprawled around an iron cauldron.  Even stranger is the mysterious 'blue lady' that a drug-addled witness claims killed the men.
Lana Valenciano, an ambitious CIA operative, informs Agent Hernandez that the murders might be connected to a legendary South American criminal known as the General.  Lana claims the General has become a threat to national security -- but has no idea how to find him.
The government's best hope?  Private investigators Dominic Grey and Viktor Radek, who might be the only people alive with the skills to unravel the General's tangled web.
Thrown together on a covert manhunt, Grey and the two agents delve into the darkest reaches of international drug trafficking, only to unearth a sinister chapter in the history of the CIA that has spilled into the present -- and put them in the crosshairs of an underworld puppeteer with a frightening reach.