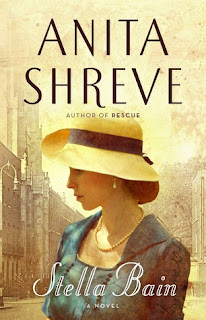 Anita Shreve is such an excellent writer! I've just finished reading Stella Bain (published in 2013), and I loved the story. The plot takes place in Europe during World War I, before the United States became involved in the conflict. I don't want to include spoilers, so I'll just say that when the story opens, the main character has lost her memory.
The author included vivid descriptions of the treatment of wounded soldiers during that war, and also gave me an appreciation of the way women were perceived. For example, a diagnosis of "shell shock" in men was deemed "hysteria" in women. Stella Bain's story unfolds slowly, as the protagonist recovers her memory, and the author goes deep inside her characters. My only complaint, and it's a minor one, is that I would have liked a little more time and attention given to the ending. But maybe that's because I didn't want the story to end! Otherwise, this is a fascinating book that I enjoyed immensely.

First Paragraph(s):
Marne, March, 1916
Sunrise glow through canvas panels. Foul smell of gas gangrene. Men moaning all around her. Pandemonium and chaos.
She floats inside a cloud. Cottony, a little dingy. Pinpricks of light summon her to wakefulness. She drifts, and then she sleeps.
Distinct sounds of metal on metal, used instruments tossed into a pan. She tries to remember why she lies on a cot, enclosed within panels of canvas, a place where men who die are prepared for burial away from the rest of the wounded, a task she has performed any number of times.
She glances down and finds that she is wearing mauve men's pajamas. Why do her feet hurt?

Teaser (from Page 57 of my hardback copy - I cheated and included three sentences):
Stella has a sudden and intense desire to flee, but she cannot run away from the man beside her. Instead, she freezes rigid on the spot, unable to move a limb, unable to make sense of anything happening around her. She reaches for the back of her neck, certain that someone or something is about to grab her.

Synopsis (from Goodreads):
When an American woman, Stella Bain, is found suffering from severe shell shock in an exclusive garden in London, surgeon August Bridge and his wife selflessly agree to take her in.    A gesture of goodwill turns into something more as Bridge quickly develops a clinical interest in his houseguest. Stella had been working as a nurse's aide near the front, but she can't remember anything prior to four months earlier when she was found wounded on a French battlefield.    In a narrative that takes us from London to America and back again, Shreve has created an engrossing and wrenching tale about love and the meaning of memory, set against the haunting backdrop of a war that destroyed an entire generation.