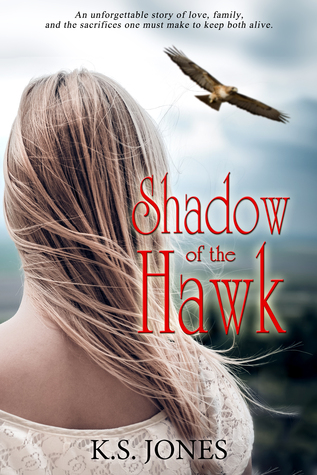 Shadow of the Hawk is so rich in detail and has such a compelling plot that I had a hard time putting it down to go to sleep at night. Seems like one catastrophe after another piles onto the Williams family's shoulders, all told in the voice of sixteen-year-old Sooze. The author's attention to the day-to-day realities of life in rural Arkansas during the Great Depression adds depth to the story without slowing down the action and gave me a greater appreciation for the hardships many people experienced during that era. I found much to admire in the characters K. S. Jones created.

I didn't realize Shadow of the Hawk was classified as young adult until I started putting together this post. The book would appeal to all ages. The plot and the themes of family, loyalty, perseverance, and love kept me intrigued until the story's end.

First Paragraph(s):
The town of Coaldale wound through the timbered valley like a black snake in the dark hole of an outhouse. Folks knew it was there by the grim feeling it posed, but the need to stay overpowered the urge to run.
I had lived my whole life in the low-lying basin between the Arkansas Western Railroad and the Poteau River--the only river in the state which flowed north. Fitting, I suppose. It seemed everything had turned around backwards and was running the wrong way. I wasn't blaming God though. A lot of trouble we caused ourselves.

Teaser from 35% on my Kindle - You'll appreciate your microwave after reading the author's descriptions of cooking:
I filled two small saucepots with water, set them on the stovetop, and then added kindling to the coal inside the stove's belly and lit it. Our heavy cast iron skillet took two hands to lift onto the stovetop, but as soon as I placed it, I dropped in a glob of butter and readied it for the pork and mush.

Synopsis:
It is May 1932 and life in the timbered rise and fall of Western Arkansas has just gotten harder for sixteen-year-old Sooze Williams. With debt mounting and both friends and family fleeing, Sooze is determined to ‘do the right thing’. She promises her heart to a well-to-do man believing true love is just another loss along the way.      But when her uncle is murdered and family is accused of the crime, Sooze vows not to be beaten. Is salvation within her grasp by relying solely on truth, or is it in the security of her intended’s money? Sooze must decide before it’s too late.

First Chapter/First Paragraph/Tuesday Intros is hosted by Bibliophile By The Sea. To participate, share the first paragraph (or a few) from a book you're reading or thinking about reading soon.
Link at BibliophileByTheSea
at 8:16 PM