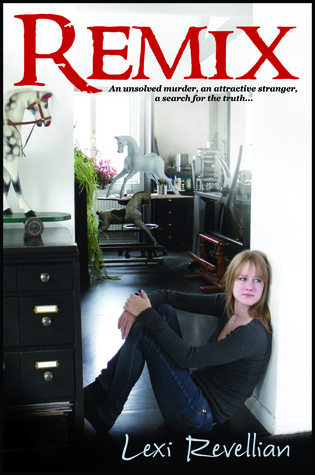 I enjoyed escaping to London through the pages of REMIX. The heroine of this story (Caz) restores rocking horses for a living; the hero (Ric) is a rock star in a band named The Voices in My Head. Who could imagine those two together? The author kept me wondering if Ric was scamming Caz or if he really was innocent of the murder everyone seemed to think he'd committed. He seems to be telling the truth, but ... with the drugs and drinking in his earlier years, maybe he actually did kill his friend. Or has he really changed while he's been in hiding?

Book Beginning:
I didn't see the man straight away.
The sun was shining, so I'd taken my breakfast toast and coffee out on the terrace. I strolled to the far corner to admire a view I never tire of: a London roofscape, a glimpse of trees in Hoxton Square two streets away, and the distant Gherkin gleaming in the early morning sun.

The Friday 56 (from 56% on my Kindle):
Ric wore jeans and a white shirt, with most of the buttons undone, and I could hardly take my eyes off him. This was nothing new. Sometimes, when he was out, I'd secretly go to YouTube and watch videos of The Voices performing, so I could stare at him as much as I liked without him noticing and teasing me.

Synopsis (from Goodreads):
Ric Kealey is the charismatic lead singer of uber-successful band, The Voices in my Head - and he died three years ago. Caz Tallis restores rocking horses in her London studio. When Ric turns up, shabby and alive, on Caz's roof terrace, she is reluctantly drawn into investigating the murder that led him to fake his own death. A feel good page turner; contemporary fiction with elements of murder mystery and romance, and a satisfying ending.

Just for fun, I'm including the book's trailer too:

Anyone can participate in Book Beginnings on Friday and
The Friday 56.