Half Broke Horses - #BookBeginnings on Friday and The #Friday56

I've been reading as much as ever lately but haven't been participating in The Friday 56 or Book Beginnnings on Friday in a long time. However, I enjoyed Half Broke Horses so much that I decided to jump back in. This is a novel based on memories from Jeannette Walls's mother, relating to the author's grandmother -- Lily Casey Smith. In the "Author's Note" section, Walls writes: "... since I have also drawn on my imagination to fill in details that are hazy or missing... the only honest thing to do is call the book a novel." 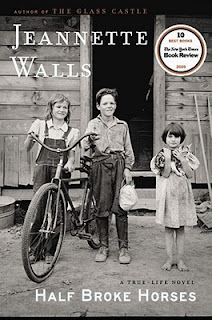 Those old cows knew trouble was coming before we did.
It was late on an August afternoon, the air hot and heavy like it usually was in the rainy season. Earlier we'd seen some thunderheads near the Burnt Spring Hills, but they'd passed way up to the north. I'd mostly finished my chores for the day and was heading down to the pasture with my brother, Buster, and my sister, Helen, to bring the cows in for their milking. But when we got there, those girls were acting all bothered. Instead of milling around at the gate, like they usually did at milking time, they were standing stiff-legged and straight-tailed, twitching their heads around, listening.
Buster and Helen looked up at me, and without a word, I knelt down and pressed my ear to the hard-packed dirt. There was a rumbling, so faint and low that you felt it more than you heard it. Then I knew what the cows knew -- a flash flood was coming.

That well water tasted sweeter than the finest French liqueur. Some folks, when they struck it rich, liked to say that they were in the money, and that was how I felt - rich - only we were in the water.

Synopsis (from Goodreads):
"Those old cows knew trouble was coming before we did." So begins the story of Lily Casey Smith, Jeannette Walls's no nonsense, resourceful, and spectacularly compelling grandmother. By age six, Lily was helping her father break horses. At fifteen, she left home to teach in a frontier town -- riding five hundred miles on her pony, alone, to get to her job. She learned to drive a car ("I loved cars even more than I loved horses. They didn't need to be fed if they weren't working, and they didn't leave big piles of manure all over the place") and fly a plane. And, with her husband Jim, she ran a vast ranch in Arizona. She raised two children, one of whom is Jeannette's memorable mother, Rosemary Smith Walls, unforgettably portrayed in The Glass Castle.

Lily survived tornadoes, droughts, floods, the Great Depression, and the most heartbreaking personal tragedy. She bristled at prejudice of all kinds -- against women, Native Americans, and anyone else who didn't fit the mold. Rosemary Smith Walls always told Jeannette that she was like her grandmother, and in this true-life novel, Jeannette Walls channels that kindred spirit. Half Broke Horses is Laura Ingalls Wilder for adults, as riveting and dramatic as Isak Dinesen's Out of Africa or Beryl Markham's West with the Night. Destined to become a classic, it will transfix audiences everywhere.