The Secret Wife - #BookBeginnings on Friday and The #Friday56 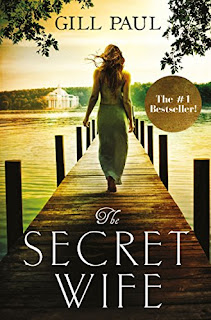 Love this book! Two separate plots - one beginning in 1914, one in 2016. They come together to create an enchanting book. I learned more about Russian history from this story than I expected and in an entertaining way. The author did a great job of tying everything together. It is definitely worth reading.

Book Beginning:
Lake Akanabee, New York State,
19th July 2016
It was twenty-nine hours since Kitty Fisher had left her husband and in that time she had travelled 3,713 miles. The in-flight magazine had said there were 3,461 miles between London and New York, and the hire car's Sat Nav told her she had driven 252 miles since leaving the airport. A whole ocean and half a state lay between her and Tom. She should have been upset but instead she felt numb.

Friday 56 (from 56% on my Kindle):
She grasped the letter and hugged it tightly to her chest as she wept like a child, with complete abandon. There was a painful spot deep inside and she hoped the crying jag might shift it but when she clambered up to the cabin and pulled herself into bed fully clothed, it was still there.

A Russian grand duchess and an English journalist. Linked by one of the world’s greatest mysteries . . .
Love. Guilt. Heartbreak.
1914
Russia is on the brink of collapse, and the Romanov family faces a terrifyingly uncertain future. Grand Duchess Tatiana has fallen in love with cavalry officer Dmitri, but events take a catastrophic turn, placing their romance – and their lives – in danger . . .
2016
Kitty Fisher escapes to her great-grandfather’s remote cabin in America, after a devastating revelation makes her flee London. There, on the shores of Lake Akanabee, she discovers the spectacular jewelled pendant that will lead her to a long-buried family secret . . .
Haunting, moving and beautifully written, The Secret Wife effortlessly crosses centuries, as past merges with present in an unforgettable story of love, loss and resilience.
Perfect for fans of Kate Morton and Dinah Jefferies.