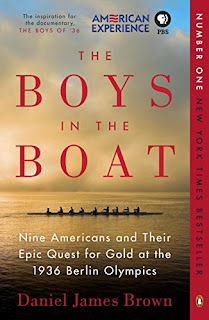 Anyone who enjoys stories of triumph over adversity will be enthralled by The Boys in the Boat. The author shows the incredibly hard work that goes into being part of a crew team and taught me more than I expected about events during the 1930s, leading up to World War II. I don't read much nonfiction, but this book kept me turning pages as if I were reading a thriller. I'd already seen the PBS special about this amazing team of rowers, but as is usually the case, the book went into much greater detail than the documentary and focused on the life of rower Joe Rantz. As a resident of the Seattle area, I was fascinated by the setting too.

Each chapter begins with a photo from the 1930s, as well as a quote from George Yeoman Pocock, the man who built the boats for the Washington team and most other teams, as well.

First Paragraphs from Chapter One (instead of from the Prologue):
Monday, October 9, 1933, began as a gray day in Seattle. A gray day in a gray time.
Along the waterfront, seaplanes from the Gorst Air Transport company rose slowly from the surface of Puget Sound and droned westward, flying low under the cloud cover, beginning their short hops over to the naval shipyard at Bremerton. Ferries crawled away from Colman Dock on water as flat and dull as old pewter. Downtown, the Smith Tower pointed, like an upraised finger, toward somber skies. On the streets below the tower, men in fraying suit coats, worn-out shoes, and battered felt fedoras wheeled wooden carts toward the street corners where they would spend the day selling applies and oranges and packages of gum for a few pennies apiece. Around the corner, on the steep incline of Yesler Way, Seattle's old, original Skid Road, more men stood in long lines, heads bent, regarding the wet sidewalks and talking softly among themselves as they waited for the soup kitchens to open. Trucks from the Seattle Post-Intelligencer rattled along cobblestone streets, dropping off bundles of newspapers. Newsboys in woolen caps lugged the bundles to busy intersections, to trolley stops, and to hotel entrances, where they held the paper aloft, hawking them for two cents a copy, shouting out the day's headline: "15,000,000 to Get U.S. Relief."

Teaser (from Page 84):
It rained, and they rowed. They rowed through cutting wind, bitter sleet, and occasional snow, well into the dark of night every evening. They rowed with cold rainwater running down their backs, pooling in the bottom of the boat, and sloshing back and forth under their sliding seats.

Synopsis (from Amazon):
For readers of Unbroken, out of the depths of the Depression comes an irresistible story about beating the odds and finding hope in the most desperate of times—the improbable, intimate account of how nine working-class boys from the American West showed the world at the 1936 Olympics in Berlin what true grit really meant.    It was an unlikely quest from the start. With a team composed of the sons of loggers, shipyard workers, and farmers, the University of Washington’s eight-oar crew team was never expected to defeat the elite teams of the East Coast and Great Britain, yet they did, going on to shock the world by defeating the German team rowing for Adolf Hitler. The emotional heart of the tale lies with Joe Rantz, a teenager without family or prospects, who rows not only to regain his shattered self-regard but also to find a real place for himself in the world. Drawing on the boys’ own journals and vivid memories of a once-in-a-lifetime shared dream, Brown has created an unforgettable portrait of an era, a celebration of a remarkable achievement, and a chronicle of one extraordinary young man’s personal quest.