The Other Daughter - #BookBeginnings on Friday and The #Friday56 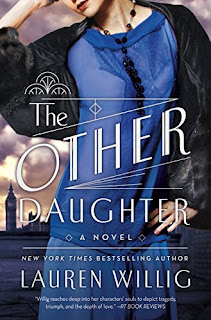 What if your past was a lie? How far would you go to confront the father who you believe had died but, in reality, had abandoned you and your mother? In The Other Daughter, the main character takes on a new identity and insinuates herself into London society with a goal of exposing her father. But as in so many good stories, things aren't always as they seem.
I enjoyed this book. I loved the characters, enjoyed a glimpse into the lifestyle of the rich, and adored the descriptions of their clothes. The plot kept me engaged, too. I'll look for more books by this author.
This is another book I came across at the library.

Book Beginning:
"Can we go look, can we go look, can we go look?" Eight-year-old Amelie tugged at Rachel's hand, pulling her toward the stairs.
"I don't see what the point is of looking at a party you can't go to," said thirteen-year-old Albertine crossly.
"English, please," said Rachel automatically.
The girls were meant to speak English when they were with her; the countess had been very clear about that. If it was a rule Rachel enforced somewhat selectively, that, she decided was a matter for her own conscience.

Friday 56 (from page 156 in trade paperback):
It had only been leased, not owned. As, apparently, had her father, and her name, and everything else she had believed to be hers. A feeling of raw panic subsumed her.

Raised in a poor yet genteel household, Rachel Woodley is working in France as a governess when she receives news that her mother has died, suddenly. Grief-stricken, she returns to the small town in England where she was raised to clear out the cottage... and finds a cutting from a London society magazine, with a photograph of her supposedly deceased father dated all of three months before. He's an earl, respected and influential, and he is standing with another daughter--his legitimate daughter. Which makes Rachel...not legitimate. Everything she thought she knew about herself and her past--even her very name--is a lie.
Still reeling from the death of her mother, and furious at this betrayal, Rachel sets herself up in London under a new identity. There she insinuates herself into the party-going crowd of Bright Young Things, with a steely determination to unveil her father's perfidy and bring his--and her half-sister's--charmed world crashing down. Very soon, however, Rachel faces two unexpected snags: she finds she genuinely likes her half-sister, Olivia, whose situation isn't as simple as it appears; and she might just be falling for her sister's fiancé...