Blueprints - #BookBeginnings on Friday and #TheFriday56 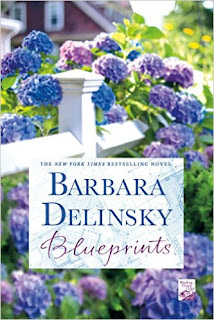 If I'm looking for a book with an engaging plot, believable characters, and an interesting setting, I know I can count on one written by Barbara Delinsky. Blueprints takes readers into the world of home renovation TV shows - just the thing for an HGTV addict like me! There's conflict between mother and daughter as major changes are planned for the show, and there's romance too. At age 56, is mom too old for love? I don't think so!
Thank you, Sandra, for sending me this book for my birthday.

Book Beginning:
Prologue
The rain let up just in time. The final day of taping for the spring season of Gut It! was about to begin, and though the sun hadn't yet appeared, Caroline MacAfee's hopes were high. Well behind the stream of work vehicles pulling up on the road, the western sky was giving way to scattered patches of blue, as the June breeze pushed gunmetal clouds east, toward Boston and the sea.

Friday 56 (from Page 56):
She sat forward and called, "That place is in the middle of nowhere. It has water problems, zoning problems, access problems, and" - she raised her voice when he didn't stop - "It's so infested with carpenter ants that you'd be best burning the thing to the ground. You don't want that place, Dean!...."

Set in suburban Boston in a world of reality tv and home design, Blueprints is the story of two strong women, Caroline and Jamie MacAfee, mother and daughter, best friends. The day after her 56th birthday, Caroline is told that she is too old to be the public face of Gut It!, a family-based home construction show, and that her 29-year-old daughter, Jamie, will replace her as its host. Daughter ousting mother from a job she loves? The resulting rift occurs at a time when each needs the other more than ever.
For Jamie, an architect, life changes overnight when, soon after learning of the host shift, her father and his young third wife die in a freak accident that orphans their two-year-old son. Accustomed to neatness and planning, she is suddenly grappling with a toddler who misses his parents, a fiancé who doesn’t want the child, a staggering new attraction, and a work challenge that, if botched, could undermine the future of both MacAfee Homes and Gut It!
For Caroline, a master carpenter, hosting Gut It! was an inadvertent sideline that has become part of her identity. Facing its loss, she feels betrayed by her daughter and old in the eyes of the world. Already raw, when her ex-husband dies, she is thrust into the role of giving emotional support to his aging father, who suddenly has other designs on her time. And then there’s Dean, her long-time friend, who sets out to show her that age is just a number. His efforts to seduce her awaken desires in her that have been dormant for so long that she feels foreign to herself.
Who am I? Both women ask themselves this as their lives take dramatic twists. Their challenge is not only to find themselves but to find each other again.