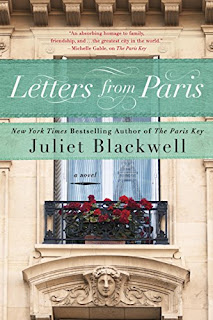 I've always hoped to visit Paris, and Letters from Paris made me want to catch the next plane to France! Juliet Blackwell tells the story of a woman who leaves a high-powered job in Chicago to take care of her grandmother in Louisiana. That decision leads to a journey to Paris to track down the history of a mask of a woman called L'Inconnue (The Unknown Woman). The story of the creation of the original mask (100 years earlier) weaves through this contemporary tale.
I enjoyed this love story/mystery a lot and will pick up The Paris Key when I return Letters from Paris to the library.

First Paragraphs/Intro (Prologue):
Sabine
February 27, 1898
He sleeps.
Sabine creeps across the dark studio before dawn, beseeching the silent faces not to betray her. They watch her every move, mute witnesses to her crime.
Slipping through the door, she winces at the scraping sound of metal on metal as she pauses to latch it behind her. Fog envelops her, the mist cutting through her threadbare blouse and underthings, wet needles of cold air piercing her skin.

Teaser (from Page 111):
But no matter the author, each of the tales ended in L'Inconnue meeting her watery death in the Seine at a brutally young age. Yet no one knew who she really was. How could so many have written about her, obsessed over her - including some of the greatest minds of Europe - and yet she remained inconnue?

Synopsis (from Amazon):
After surviving the accident that took her mother’s life, Claire Broussard has worked hard to escape her small Louisiana hometown. But these days she feels something is lacking. Abruptly leaving her lucrative job in Chicago, Claire returns home to care for her ailing grandmother. There, she unearths a beautiful piece of artwork that her great-grandfather sent home from Paris after World War II.
At her grandmother’s urging, Claire travels to Paris to track down the century-old mask-making atelier where the object, known only as “L’Inconnue”—or The Unknown Woman—was created. Under the watchful eye of a surly mask-maker, Claire discovers a cache of letters that offers insight into the life of the Belle Epoque woman immortalized in the work of art. As Claire explores the unknown woman’s tragic fate, she begins to unravel deeply buried secrets in her own life.