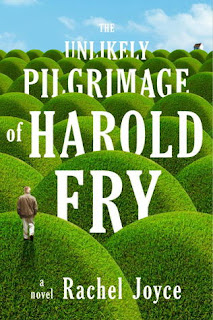 If you liked the scenes in Forrest Gump where he walks across America, you'll love The Unlikely Pilgrimage of Harold Fry. And if you enjoy stories featuring older characters who make changes in their lives, then that's another reason this book will appeal to you. This touching story was a winner on both counts for me.

First Paragraph:
Harold and the Letter
The letter that would change everything arrived on a Tuesday. It was an ordinary morning in mid-April that smelled of clean washing and grass cuttings. Harold Fry sat at the breakfast table, freshly shaved, in a clean shirt and tie, with a slice of toast that he wasn't eating. He gazed beyond the kitchen window at the clipped lawn, which was spiked in the middle by Maureen's telescopic washing line, and trapped on all three sides by the neighbors' stockade fencing.

Teaser (at 6% on my Kindle):
The useful thing about a sunny day was that it showed up the dust, and dried the laundry in almost less time than the tumble drier. Maureen had squirted, bleached, polished, and annihilated every living organism on the worktops.
(I like this Teaser because it tells me a lot about this character and her priorities.)

Synopsis (from Goodreads):
Harold Fry is convinced that he must deliver a letter to an old friend in order to save her, meeting various characters along the way and reminiscing about the events of his past and people he has known, as he tries to find peace and acceptance.
Recently retired, sweet, emotionally numb Harold Fry is jolted out of his passivity by a letter from Queenie Hennessy, an old friend, who he hasn't heard from in twenty years. She has written to say she is in hospice and wanted to say goodbye. Leaving his tense, bitter wife Maureen to her chores, Harold intends a quick walk to the corner mailbox to post his reply but instead, inspired by a chance encounter, he becomes convinced he must deliver his message in person to Queenie--who is 600 miles away--because as long as he keeps walking, Harold believes that Queenie will not die.
So without hiking boots, rain gear, map or cell phone, one of the most endearing characters in current fiction begins his unlikely pilgrimage across the English countryside. Along the way, strangers stir up memories--flashbacks, often painful, from when his marriage was filled with promise and then not, of his inadequacy as a father, and of his shortcomings as a husband.
Ironically, his wife Maureen, shocked by her husband's sudden absence, begins to long for his presence. Is it possible for Harold and Maureen to bridge the distance between them? And will Queenie be alive to see Harold arrive at her door?