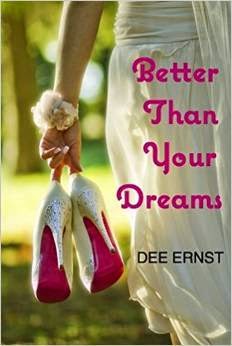 I've read every one of Dee Ernst's books and treasure them all, especially her new release Better Than Your Dreams. In this book and in Better Off Without Him, her character Mona has too many things going on in her life: her almost-80-year-old aunt is getting married to a shady character; her eldest daughter is engaged to Mona's boyfriend's son (after a very brief courtship); a curvaceous predator is after her man; and she's received a marriage proposal herself! The result is a hilarious and heart-warming story of a "woman of a certain age" trying to cope with everything life is throwing at her. Mona is someone you'd love to have as a friend. With Mona around, your life would never be dull!

Better Than Your Dreams will officially be released August 6 but is available for pre-order in ebook format for only $2.00 right now.

(My excerpts are from an advance copy.)

First Chapter / First Paragraph:
In the eighteen months that I had been flying back and forth between LAX in California and EWR in Newark, New Jersey, I had never quite gotten the hang of it. I didn't mind the flight out to LA. For some reason it seemed shorter and easier. But coming back--very tough. Maybe it was because I always took the first flight out at six in the morning. Which meant being at the airport by five in the morning, which meant I had to leave my house at--Never mind. It's too depressing to think about.

In my Teaser, Mona bought beautiful clothes while in Los Angeles. However, now she's dressing for Thanksgiving dinner, and she's getting frustrated. After all, she needs to outshine Carmella, the woman she's convinced has designs on her man.

I grabbed several outfits and started trying them on. Nothing that was appropriate for drinks on a terrace overlooking the Hollywood sign was going to fly during a family dinner in Westfield, New Jersey, in November.
Maybe I'd just come downstairs in my black bustier, satin tap pants, and garter belt.

Synopsis:
In this follow-up to Better Off Without Him, Mona Quincy once again faces life’s tough moments with good friends, lots of laughs, and a cold, dry martini. For the past eighteen months, Mona has had a long-distance relationship with the man of her dreams, Ben Cutler. She’s been in LA working on a screenplay, while he’s been keeping the NJ home fires burning. But now she’s back, and she needs to find an answer to the question that was left unanswered a year and a half ago – will she and Ben marry?
Mona doesn’t think she ever wants to get married again – not even to someone as practically perfect as Ben Cutler. But before she can think about her own marriage plans, she’s got a few other weddings to deal with. Her Aunt Lily doesn’t think that being almost eighty should deter her future happiness, and has met her perfect partner in Vinnie DeMatriano, who just happens to be the uncle of a slightly notorious crime boss. True, they’ve only know each other three months, but they want to tie the knot - in Mona’s back yard. Then Miranda, Mona’s oldest daughter, announces that she’s ready to get married after a three month long courtship of her own – to Ben’s son, David.
Ben believes in love at first sight, and is thrilled for Miranda and David. Mona – not so much. She doesn’t want her daughter to marry anyone after such a short time. As they find themselves at odds for the very first time, Ben thinks they should step back and take some time away from each other. Mona is still unwilling to commit fully to Ben, and can only stand by as Carmella Ciavaglia, Vinnie’s wedding-planner daughter, circles Ben like a great white shark. Will  Mona finally get her Happily Ever After? Or has she learned her hardest lesson just a little too late?

Share the first paragraph (or a few) from a book you are reading. Here's the link: Bibliophile By The Sea

Post two sentences from somewhere in a book you're reading. No Teasers, please! Here's the link: Should Be Reading