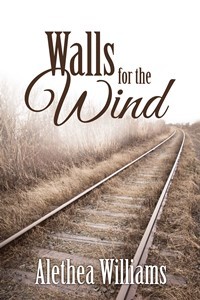 I've been interested in "orphan trains" for a long time. That's the name given a supervised welfare program that transported orphaned children from the crowded cities of the East Coast of the U.S. to the Midwest and beyond. The trains ran from the 1850s to the 1920s. So when I read this book's synopsis and saw that these trains were integral to the plot, I had to read it.

WALLS FOR THE WIND tells the story of a young woman (Kit Calhoun) who helps run an orphanage in New York City. She is given the task of accompanying groups of children on orphan trains to the Midwest. However, her story takes her even farther from her familiar home - to Cheyenne, Wyoming. Read my review on Amazon:  HERE.

The book begins with a prologue:

BOOK BEGINNING:
Cheyenne, Dakota Territory, January 1868
Panic bloomed, threatening to choke Kit as she gasped for breath. Where could she be, the small girl brought all the way out to the wilds of Wyoming from New York City? So certain she could make the best decisions for the little golden-haired girl, Kit had gone against her own upbringing as well as the stern advice of those older and wiser in order to make this journey west. Now here was her little family plunked down in the raw boomtown of Cheyenne, and she had lost not only her own direction but also the child entrusted to her care.

FRIDAY 56 (from 56% on my Kindle):
A group of four long-haired Indians walked in on silent feet. Any rebuke died on Kit's lips. She sucked in a breath. Her eyes widened and her jaw dropped. No one else in the depot was aware yet of the danger.

Anyone can participate in Book Beginnings and The Friday 56.