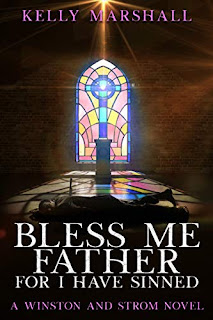 Seattle PD Homicide Detectives Nick Winston and Pat Strom are once again on the hunt for a killer in Bless Me Father For I Have Sinned. In this fourth book in the series, the victim is Father Michael Dunne. Who would want to murder the beloved priest? Could the killer be a former lover? A druggie? A sexual abuse victim? The search takes the detectives from Seattle's squalid homeless camps to Tacoma's Catholic sanctuaries in search of the killer.

Kelly Marshall sprinkles her mystery with humor--sometimes dark, often politically incorrect--and the ongoing banter between Winston and Strom provides a respite from the plot's tension. The strong friendship between the detectives shows their human side, too. Marshall kept me wondering whodunit until the story's end.

This book stands alone but once you've read it, you'll like the characters and plot so much you'll want to read all four Winston-Strom mysteries.

Book Beginning:
Hunched in a pew outside the confessional, Cecilia Armstrong fingered her blue rosary beads as she whispered the well-known words, "Hail Mary, full of grace...." She completed the rosary and opened her eyes. What was taking Father Michael so long with the last penitent? She tried not to judge, but surely someone had confessed mortal sins. Otherwise, why would the priest have to counsel them so long?

Friday 56 (from 56% on my Kindle):
"He threatened Dunne on more than one occasion. We don't have a smoking gun yet but give us time. We'll find it because this creep murdered Dunne."

Synopsis (from Amazon):
A charismatic and popular priest, Father Michael Dunne is brutally stabbed to death in the confessional. The Seattle Catholic Community is stunned and in mourning for a cleric who served not only the people in his parish but many in the Northwest's burgeoning homeless and drug-addicted communities.     Seattle homicide detectives Nick Winston and Pat Strom find Father Mike face down in a pool of blood with multiple stab wounds to his body. Because the attack was so savage, the police surmise the killer knew the pastor. What in his past could account for the highly personal nature of the crime? Was he murdered by a penitent scared that the priest would break the seal of the confessional? Or did an illicit love affair come back to haunt Michael Dunne?     Everyone loved Father Mike...with one grave exception.