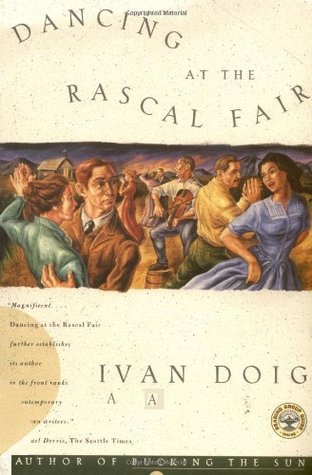 I've never been to Montana, but I feel like I've seen its wide open spaces and soaring mountains after reading Dancing at the Rascal Fair by Ivan Doig. This second book in Doig's Montana trilogy (it stands alone) made me a fan of his writing, and I've read almost all his books. Unfortunately, Mr. Doig passed away earlier this year at age 75.

Book Beginning (It starts with a newspaper story.)

Scotland and Helena
Harbour Mishap at Greenock. Yesterday morning, while a horse and cart were conveying a thousand-weight of sugar on the quay at Albert Harbour, one of the cartwheels caught a mooring stanchion, which caused the laden conveyance and its draft animal to fall over into the water. The poor creature made desperate efforts to free itself and was successful in casting off all the harness except the collar, which, being attached to the shafts of the sunken cart, held its head under water until it was drowned. The dead animal and the cart were raised during the forenoon by the Greenock harbour diver.
-- Glawgow Caledonian, October 23, 1889

To say the truth, it was not how I expected - stepping off toward America past a drowned horse.

The Friday 56 (from Page 56 in my trade paperback edition):
Past the rear of his saloon and across a wide weedy yard he led us toward a two-story frame house. The house needed paint - this entire town needed that - but it sat comfortably between two fat gray cottonwood trees, like a mantel clock between pewter candlesticks.

Synopsis:
The central volume in Ivan Doig's acclaimed Montana trilogy, Dancing at the Rascal Fair is an authentic saga of the American experience at the turn of this century and a passionate portrayal of the immigrants who dared to try new lives in the imposing Rocky Mountains.     Ivan Doig's supple tale of landseekers unfolds into a fateful contest of the heart between Anna Ramsay and Angus McCaskill, walled apart by their obligations as they and their stormy kith and kin vie to tame the brutal, beautiful Two Medicine country.